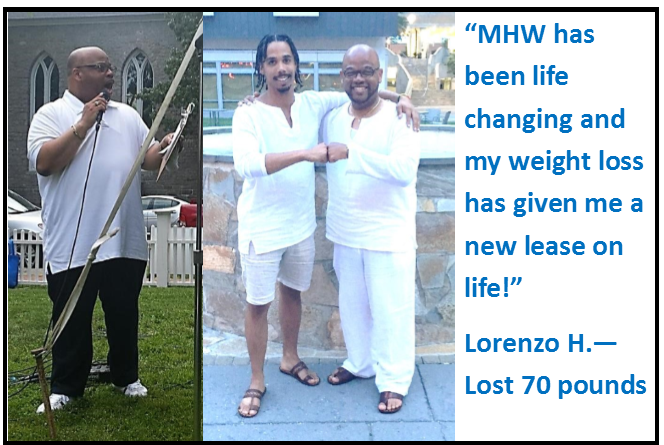 In November 2015 I ran into someone who I had not seen in years. Immediately, I was awestruck by how great he looked. I remembered him weighing a lot more. I complimented him on how awesome he looked and asked his secret. As he mentioned Maryland Healthy Weighs (MHW), my mind ran back to approximately seven years ago when, my then primary physician, Dr. Michael Fadden, suggested I consider the MHW program.

Fast forward to January 2016 during my regular six month check up with my doctor. Again she reminded me how I needed to lose weight because now I was considered pre-diabetic and she was considering adding cholesterol medicine to my list of medications. I promised (again) to try exercise and to change my diet as a last resort before agreeing to more medication. She asked had I heard of MHW and assured me they could help me lose weight. Later the same day, I read over the paperwork from my doctor’s visit and saw where I was considered “morbidly obese.” Those words hit me like a ton of bricks. Granted I realized I was pleasingly plump, but “morbidly obese?” I knew now more than ever something had to change and I needed to lose weight!

After an orientation meeting and some bloodwork, I began creating a new me with much guidance from MHW and LOTS of determination from me. The first week proved to be a real challenge because there was not a lot of food in those “blue boxes.” One week passed and I was ready for my first weigh in… I had lost 14.6 pounds! Even the nurse was shocked at the weight loss I achieved after just seven days with MHW! I was SO PROUD putting my numbers on the board and MaryKay made a big deal about it in my first class. Others in the class shared in my excitement and cheered me on to continue what I had started. From that point on, I was motivated to lose even more weight.

In addition to getting adjusted to the portion controlled meals, I went from a rather sedentary lifestyle to increasing my physical activity. I started off by walking on the treadmill for twenty minutes which eventually increased to speed walking for up to thirty minutes. I had always wanted to be a runner and after a few weeks of walking decided to walk for five minutes and run for two minutes. I continued this walk-run routine for about two months. One Saturday morning I decided to begin by running. After two minutes, I thought, I am not tired so I will keep running. Five minutes passed and I felt good, though I was beginning to get tired. I thought if I can do five minutes, let me see if I can continue to ten minutes. At the ten minute mark, I was really close to running one mile. By this time, I was sweating hard and real tired, but I was too close to one mile to stop running. Finally, after thirteen minutes, I had run a mile! From this point until now, I begin by running and am able to run a mile in approximately eleven minutes; after which, I walk-run for forty-five minutes which equals about 3.3 miles.

Striking a good balance between portion controlled eating and physical activity, the weight did begin to come off and the weight loss also showed in good bloodwork. In July, I had my six month check-up at my doctor’s office and was told my bloodwork was “perfect!” At the doctor’s office when I weighed in, I had lost seventy pounds since my January 2016 visit (this was after being in the Caribbean for two weeks prior to this appointment). From March to July, I completely transformed going from a size 52/54 suit to a size 48 suit and I lost six inches from my waist. Earning the 25 and 50 pounds lost pins were major accomplishments for me. It has been so rewarding to see my transformation. As people ask my secret, I tell them “I have a really good man girdle” and Maryland Healthy Weighs has helped, too.

MHW has been life changing and my weight loss has given me a new lease on life! Though I still cannot claim membership into the “Iddy Biddy Committee” I am very pleased about going from a “GQ” generous quotient to possibly being featured in “GQ” Gentlemen’s Quarterly! My advice to anyone who wants to lose weight – consider Maryland Healthy Weighs… for the ‘health’ of it!

Each HMR Program has different average weight-loss results. These are the results we get for people who completed between 12-26 weeks: 43-66 lbs. for the in-clinic Decision Free® plan (1), and 28-37.5 lbs. for the in-clinic Healthy Solutions® plan (2). Average weight loss for the Healthy Solutions® at Home program with phone coaching is 23 lbs. at 12 weeks and 28 lbs. at 26 weeks (3). There is no guarantee of specific results. Results can vary.